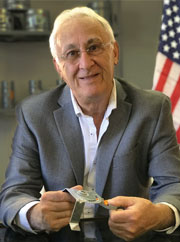 Thanks for considering Rossi as your duct hardware solution. Our products are the result of non-stop innovation. Years spent researching, designing, & listening to feedback from duct fabricators like you. That’s how we learn what is most important to you. That’s why we never stop asking “what if there’s a better way?”

It all started back in 1979 when I was running a duct fabrication shop in Sun Valley, California. As a proud member of Sheet Metal Workers Union Local 108 (later Local 105), and as a mechanical engineer, I strove to improve every aspect of our fabricated duct and fittings.

But I had one major problem – crappy duct hardware. No matter which suppliers I turned to, all the damper regulators used wingnuts or hexnuts! These inevitably rattle loose and ruin the air balance. And it wasn’t just the regulators that were awful. The damper blades and bushings commonly used across the industry were not much better. Jiffy damper blades would easily pop out of place and flop around in the air flow. And it took tons of time to drill holes in fittings just to screw in the bushings. This outdated assembly process wasted time and created big labor costs at our duct shop, prompting me to wonder “what if there’s a better way?”

So in 1989 I founded Rossi, a company focused on designing new kinds of duct hardware. First, we invented continuous-bar damper blades with a built-in channel for the bar. This eliminated floppy jiffy blades. Next, we created snap-in bushings, eliminating air leakage in duct and leading to our Speedy Assembly process. This greatly reduces assembly time in your duct shop. Then, we set our sights on those pesky wingnuts & hexnuts. By inventing and patenting our positive-locking regulators, we guaranteed that your air flow would finally remain balanced for good. Time and again, Rossi changed the game by innovating duct hardware. That’s why our products have been adopted by the biggest duct fabricators and implemented across the highest profile projects in the United States. And I couldn’t be more proud when, upon my retirement, my son and daughter took over and have always run Rossi as a true family business.

There is no other country in the world where my dream of revolutionizing duct hardware could have become a reality. I mean there’s a reason they call it the American dream. That’s why Rossi products will always be 100% designed, engineered and manufactured here in the USA. And with many exciting new products in the pipeline, Rossi can’t wait to show you what’s next.  Constant innovation, the American dream and a simple question way back in our old duct shop – “what if there’s a better way?” It’s all in Rossi’s DNA. That’s why Rossi is always the original and others have been following our lead ever since.

And that’s what makes Rossi the ultimate duct hardware.

Quicktin | Tacoma, WA
“We are very pleased with the quality of the hardware we use from Rossi. It is very durable, very quick and easy to install on our products. We have been doing business with them for 10+ years, have had no issues with the product and they have always gone above and beyond if we ever have any issues. Great company with great products!”

Stamped Fittings, Inc. | Elmira Heights, NY
"Really impressive product. I wish we would have had it for years as it would have solved several balancing issues.”

R.B. Akins Company | Oklahoma City, OK
"We have had nothing but great customer service from the Rossi team and we really do appreciate that along with the great product Rossi provides to us. Your damper blades have decreased our install times for assembly and all of the crew appreciates the simplicity of the design.”

General Sheet Metal Works, Inc. | Clackamas, OR
"We have been buying Rossi products for 30 years, and I appreciate the excellent quality and quick turnaround your entire team provides.”

Plenums Plus | Chula Vista, CA
“Rossi Damper Hardware is quickly becoming the industry standard and preferred by our customers.”

U.S. Engineering | Westminster, CO
“The Everlock’s positive-locking regulator one hand operation is a real time saver for us when air flow balancing our duct systems.”

Coziahr Heating and AC Council | Bluffs, IA
"Our communication with Rossi is usually via email and this works well from ordering, to receiving the sales acknowledgments to shipping. Pretty happy with all."

Superior Duct Fabrication | Pomona, CA
“This has been wonderful for our business and we are genuinely grateful for the jump in our turnover. Our customers are stoked with the product and Rossi is one of our favorite suppliers.”

LIMS Imports | Auckland, New Zealand
"Ever since we were introduced to Rossi damper hardware we were hooked. The damper hardware is of great quality and excellent design. We have been very pleased with the service and staff. Couldn’t ask for more.”

American Heating, Inc. | Portland, OR
"Great customer service from start to finish. Placed an order recently with Rossi and they were really helpful and very knowledgeable.“

EWC Controls | Englishtown, NJ
“Thank You for making such a great product! I firmly believe that using your dampers exclusively has set us apart from other sheet metal contractors in our area. When air balancing contractors find out we performed the work on a project ahead of them, they know they won't be wasting time looking for damper handles buried under insulation, or struggling to adjust an inferior quality regulator.”

Eastern Vent Systems, Inc. | Pelham, NH
“We have been using Rossi Hardware for over 2 years now and could not be happier with the product. The quality of the hardware is second to none and the knowledgeable and helpful staff make it even that much better of a product.”

Combined Mechanical Contractors Ltd. | Vernon BC, Canada
“We love Rossi’s simple, elegant and effective design of the damper. Will definitely incorporate your products from now on.”

H-Square Mechanical | San Jose, CA
"I am very well pleased with your dampers. Wish I had known about these 30 years ago… I first used the wingnut types since that was all my suppliers offered. Never was too happy with them and you never really knew just what position you had them in because there is so much play in them… It is only recently that I discovered Rossi and use these dampers exclusively now. Thanks for a great product.”

Atlantis Heating & Cooling | Decatur, GA
“This product is superior to others in this market – that’s why they are all trying to copy it.”

Southerntier Custom Fabricators, Inc. Elmira, NY
“I like Rossi’s customer service. Anytime we have any questions or need anything, Rossi is quick to get back with us.”

Wright Comfort Solutions | Hollis, OK
"A quality product at a lower cost that reduces shop installation time. When installed there are no tools needed for airflow adjustments. I have been buying these for 11 years now and am 100% satisfied. Great people to work with!"

Western Allied Mechanical, Inc. | Menlo Park, CA
“I think it is safe to say that I am probably one of the oldest customers of Rossi and not one time have I ever had an issue with their Customer service or the quality of their product. The first time I saw their Rossi Dampers I knew we needed to start using them in our shop and we have saved many hours of fabrication time because they are so easy to install. Rossi is and has been over the years the best company I have ever had to deal with and I have been in the sheet metal trade for over 45 years.”

Dixie Metal Products | Memphis, TN
"Since we’ve been using Rossi products our customers can’t stop raving about the dampers. Thanks."

Viskase | Osceola, AR
"From the moment I received the samples, I noticed the build quality and strength of the Rossi dampers far exceeded the traditional wing-nut and floppy dampers of old. Rossi is our pick when it comes to choosing the ultimate damper that will not disappoint, all at a competitive price.”

Core States Group | Rogers, AR
“Rossi damper hardware is easy to use and looks good installed. It is an economical alternative to use when making dampers for stainless and aluminum duct.”

Northern Mechanicals, Inc. | Norwood, NY
"Rossi dampers are head and shoulders above the standard wing nut style dampers. They may cost a little more but when you consider the quality of the damper they are worth every penny!”

Haley's Metal Shop, Inc. | Biddeford, ME
“Spinfinity uses Rossi products exclusively on our bellmouth and conical dampers, and the guys in the shop love how easy they are to install. Our customers like the Rossi Hardware for its ease of use in the field and its durability. Thanks for making such great products!”

Get Your Free Samples